Posted on May 30, 2017 by thesupacoowackiestblogintheuniverse

Now is not the time for me to procrastinate. I shall post this in advance of my next California adventure. I can’t wait to see San Fran.

Last season, producers managed to fool me with Dana & Matt winning despite their chaotic relationship for the majority of the season. For some reason, I couldn’t see their redemptive edit.

One year later, and I didn’t forget my lesson. Perhaps this is why I have picked up on their winner’s edit so early and stuck to it. Or maybe I have read a ton of spoilers and have trolled everybody since week one just because I am so invested in my own reputation, and want everyone to see how good I look.

In all seriousness though, London & Logan’s edit, Tara & Joey’s declining reputation in the edit, and Brooke & Scott’s sudden upswing is a huge sign.

This is in addition to other teams commenting on Brooke & Scott repeatedly in the past few weeks, including the other two teams in the Final Three.

Furthermore, they have been at the centre of the social game and strategy shown in the episodes. Yes, others have participated, but the idea to U-Turn Vanck & Ashton and Liz & Michael have always been shown as Scott’s plan.

As I have said before, Scott is the first person since Natalie & Nadiya that I believe will be making the crossover to Survivor. By this time next year, I could be going 3-for-3 with my assumptions.

When you have Brooke & Scott on one end of the spectrum with London & Logan on the other end, it isn’t very tough to get the silver medal in this week’s editing analysis.

Matt & Redman were the last team to directly mention the plan to eliminate Tara & Joey, and they are now eliminated. London & Logan haven’t mentioned them. I would say there is a rivalry with Brooke & Scott, but the rivalry was edited as one-sided in the last two episodes as Tara & Joey weren’t edited in the most positive light.

Tara blew up at Brooke & Scott when they were concerned for Joey’s health, and Tara & Joey did not win over too many fans in the gamer community with their commentary during the Roadblock.

Casual fans are pissed off by their behaviour, but it was hilarious enough that it has competed with Brooke & Scott’s comedic value since day one.

I mean, we just watched an Amazing Race contestant watch a teenager beat his teammate while shouting at the kid that he is an “egocentric bastard”. It took twenty-nine seasons, but it happened.

TAR 29 has been one of my favourite seasons in a very long time.

And I think the entire Midwest and any fans of the movie Rookie of the Year will not appreciate Joey’s Cubs diss as seen in the preview for the finale. 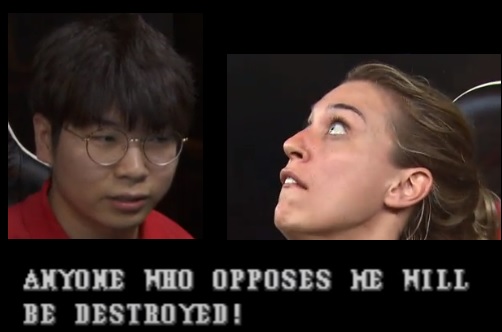 If London & Logan win this season, congratulations producers, you trolled the entire hardcore fanbase. Everyone will be scrambling to understand London & Logan’s edit.

Going from nine episodes of invisibility to “Help me, Floyd! Help me!” to having a seizure while playing a video game to winning the season while Phil drools over Logan Bauer from the sidelines? That will be hilarious.

Their social game has been near perfect.

They have taken a weak team with them to the end.

They will be preparing for any type of memory challenge thrown at them moreso than any other team left.

They will frighten the taxi drivers into driving as fast as possible while somebody like Logan would be relatively chill about it.

Brooke & Scott will be a scary team to face off against in the final leg of the season. The superfan team always has a big advantage in the final round.

To perfectly duplicate Jeremy & Sandy’s edit, London & Logan will need to lead for the first half of the finale until they choke only minutes before the finish line.

Who knew Joey taunting Cubs fans would be enough to break the Billy Goat Curse a few months later.

In all seriousness, I can’t see Tara & Joey excelling in a classic memory challenge like Brooke & Scott would.

Tara & Joey haven’t done as well over the past few rounds when you look at how awesome they were doing during the first two-thirds of the season. Joey’s physical exhaustion combined with Tara’s four hour penalty for throwing her controller at a dozen up-and-coming Korean gamers, and it looks like a tough road ahead for Tara & Joey.